Because there are many things that can affect a baby’s bowel movements ranging from whether breast-milk or formula is being given through to changes caused by teething or sickness, it can sometimes be difficult for mums to tell when things aren’t normal. Here is a simple guide to help mums decipher the contents of their baby nappies in the first twelve months.

First stool is usually passed soon after birth or within first 24 hours of life. During few days the baby passes sticky dark-black or tarry stools called as meconium. Thereafter they become greenish in color and slightly loose in consistency for the next one or two days. The regular yellow-colored stools are passed after 4-5 days of birth. 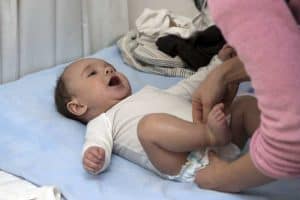 A newborn babys bowel movements in the first few hours of life should be meconium, a dark green to black colored stool that is the combination of all the waste the baby has accrued in their intestines throughout the nine months of pregnancy, including amniotic fluid, bile, mucus and discarded skin cells.

Read: A to Z of teething(Problem and its Cure)

By breastfeeding soon after birth, the colostrum that a mother produces in the first few days helps the baby to pass this meconium soon after being born, by prompting the baby’s digestive system to start performing so that the bowels are emptied numerous times a day, sometimes up to ten times in twenty four hours.

If breastfeeding is not possible, and a baby is being given formula, meconium should still be passed, although it may take a little longer. It is only after the first few days that the stools between breastfed babies and formula fed babies will appear different and they can often remain quite similar in appearance.

If a baby is still passing meconium after a few days or has not passed meconium at all after 24 hours, you should advise your doctor because it could be a sign of an intestinal blockage or other problems.

Once a mother has started producing milk instead of colostrum, a breastfed baby’s bowel movements will change from meconium to a smoother brown substance initially and then a yellowy-greenish one and be of a loose, runny consistency with a very light odor. The frequency at which a baby is nursing will speed up the process of change in color and its not unusual for some breastfed babies to empty their bowels after every feed in the first few weeks. Watery stools may indicate that your baby is consuming more of the fore milk than the hind milk when breastfeeding so mothers should adjust breastfeeding techniques so that the baby’s intake of hind-milk is increased, if this is happening.

Formula fed babies stools can be yellow, light to dark brown and green, with a texture similar to peanut butter, depending on the amount of formula the baby is having. They will have a slightly stronger odor than a breastfed baby’s stool and formula fed babies will probably poop less too, although they can still go several times a day. Constipation is more common in formula fed babies, and consequently constipation can occur when switching a baby from breast milk to formula. It is important to ensure formula is being made correctly if constipation does become a regular problem.

One month on wards until starting solids

Both breastfed and formula fed babies will have less bowel movements as they grow, but it varies between babies. Some babies may only go once a week or once every few days, and some other babies will still poop at least once a day. It is more important that a baby is frequently urinating and eating.

Upon introducing solids to a baby’s diet, bowel movements can alter in color, odor, consistency and frequency on a day to day basis, and there is usually nothing to worry about unless the stools appear different in any of the following ways, for which there can be several reasons:

– Diarrhea could mean that the baby is insensitive/intolerant to a food that has been eaten (lactose is a common culprit) or in babies who are still being breastfed while starting solids, it could also be something the mother is consuming (either food or medication) and adjustments will need to be made to the diet of the mother or the baby. Diarrhea that lasts longer than a day should be reported to the doctor as it could be related to an infection or a virus.

– Blood in a baby’s stool is not normal and could be a sign of broken skin caused by diaper rash, food or milk allergies, infection or even intestinal problems. Small streaks of blood are often caused by skin tears when passing stools due to constipation but its always best to confirm the reason with the doctor if there is any blood present.

– If a baby has a bloated stomach and strains or cries while passing stools that are very hard and cause a lot of discomfort, it is likely to be because of constipation. Babies are more prone to constipation in the early days of being weaned onto solids, until their digestive systems adjust to the new foods they are eating. This can often be helped by boosting fluid and fiber intake, but can also be a sign of an underlying medical condition such as hypothyroidism or coeliac disease, so it shouldn’t be overlooked. But do not give your baby laxatives for the constipation, unless you have been told to do so by a doctor.

Read : How and When to give Toilet Training to your baby

Breast feed baby : Breast fed babies pass golden-yellow sticky and slightly loose stools. They are a bit difficult to wash off the napkins. The breast fed baby may develop increased frequency of stools if his mother is taking certain antibiotic,laxatives and following excessive consumption of oranges,cherries,tomatoes and chilies. Exclusively breast fed babies are unlikely to develop infective diarrhea.

Bottle fed baby : Formula fed babies are usually constipated and they tend to pass dry, hard and smelly stools, which do not stick to the nappy. The constipation can be relieved by giving small amount of fresh juice (orange or sweet lemon), by adding extra sugar in the milk or by little honey.

Stool after every feed : Some babies may pass stools after every feed because as soon as the milk enters the stomach,it stimulates the colon( gastro-colic reflex) and evacuation occurs. It is just  like  bed tea effect in adults. These babies seems to have an over active gastro-colic reflex. The stool are small in quantity, almost like dropping of the bird. The child may pass a little stool every time by passes wind. It is a nuisance for the mother for changing the nappies but child continues to thrive well and weight gain is satisfactory. The condition disappears spontaneously after a couple of weeks. Some of these babies may strain after every feed or strain persistently without any evacuation. Many such babies are given medicines for mistaken diagnosis of  diarrhea  which must be avoided.

Greenish or white stools : You should not worry if an occasional stool is green or white in color. Babies with increases gastro-colic reflex or mild infection may pass greenish stools. When stool are persistently chalky- white or clay -colored and baby is jaundiced, you should immediately consult your doctor.

On my blog readers’ request, I started manufacturing herbal products at home.
Blended with elder’s experience & vedic science, my products promise to provide you a good alternative to cosmetics.